This post taken from an interview with our owner, Dave Hutcher, by Waterproof! Magazine. 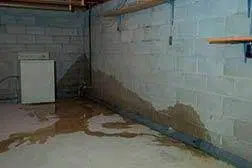 I’ll never forget the wonderful couple I met in the fall of 1999. They called me out to their home in central Pennsylvania to see what could be done about water entering their basement after heavy rains. As we began to discuss their options, they politely stopped me and told me they would not be interested in anything requiring exterior excavation and sealing the wall from the outside. When I asked why not, they simply stated, “It doesn’t work!”

As it turned out, they hired a general contractor to dig around their entire foundation and apply waterproofing coating to the exterior of the cement block walls. Included with this was a footer drain to help drain water away from the foundation. To complete the project, all of the landscaping needed to be removed, including their deck, and then replaced after the work was finished. The cost for this project was more than they wanted to admit, but I got the sense they were happy to invest whatever was required to solve the groundwater problem in their home.

Unfortunately, the method of repair they invested in did not address the entire issue. Less than two years after they had the work completed, the water began entering the home again after heavy rains and always through the same place. The seam where the floor slab meets the wall constantly let water seep in during and after heavy rains. This was due to the high water table under the basement slab. Hydrostatic pressure was forcing the groundwater from under the slab and wall where the exterior work had absolutely no effect on the interior water issues. The contractor did great work, but it was the wrong work for this type of basement floor slab leak.

These homeowners would have been much better served by having an interior drain tile system installed, which is exactly what we did for them. An interior drainage system collects and manages the water under the slab and uses sump pumps to evacuate the water from the home. Because water will always drain to the low spot, gravity is the primary force behind this alternative waterproofing method. While it took close to five weeks to seal the foundation from the outside, we were able to solve the entire water issue from start to finish in three days for one third of the cost.

Over 90% of the homes we work on have had some type of exterior waterproofing done to the foundation. The seam between the floor slab and the wall, called the cove area, is the most common place for the water to find its way to the basement and is exactly where an interior drainage system is installed. This ensures the water under the slab is collected and carried away before it can enter the basement through the cove area.

Growing up in Maryland, Dave Hutcher worked for two decades in basement waterproofing and foundation repair. After relocating to western Pennsylvania, Dave continued as owner of Poseidon Waterproofing.